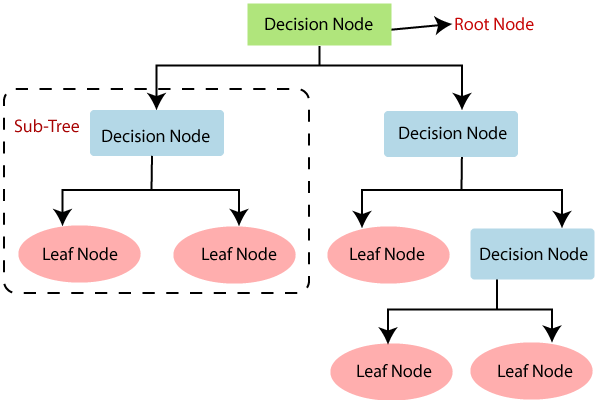 Decision Tree algorithm is one of the most used supervised Machine Learning Algorithm in use today. Although it can be used for both classification and regression problem but mostly it is in use with the obstacles related to classification only.

The structure of a decision tree is quite simple, where internal nodes represent the features of the dataset, branches represent the decision rules and each leaf nodes describe the outcomes.

There are two nodes in every decision tree. One is decision node and the other is leaf node. Decision nodes have many branches and leaf nodes are the resultant / outcome of the decisions that were taken to reach to its point. These decisions are made based on a given dataset.

To build a tree, we use CART algorithm, which stands for Classification and Regression Tree Algorithm.

Why should be use Decision Tree Algorithm

There are different Machine Learning algorithms, supervised and unsupervised, to be implemented by the data scientists. However, the problem is choosing which algorithm to be chosen in under which scenario. Below are two reasons for choosing Decision Tree algorithm:

How does this Algorithm work?

Before implementation of any algorithm, it is highly favorable for any data professional that he should know the internal working or at least a basic understanding of this algorithm’s mechanism.

The algorithm starts from the root node of the tree. This algorithm compares the values of root attribute with the record (real dataset) attribute and based on the comparison, follows the branch and jumps to the next node.

For the next node, the algorithm again compares the attribute value with the other sub-nodes and move further. It continues the process until it reaches the leaf node of the tree.

One can understand the working by this algorithm:

Suppose there is a job candidate, who is offered a job in a company and he wants to decide whether he should accept the offer or not. The root node splits into different decision nodes and he only needs to answer the questions based upon different factors / attributes that are important to him. Anyways, the leaf nodes keep splitting up until the required decision is made.

The following diagram will easily make you understand how you can graphically represent the DTA:

Advantages of the Decision Tree

Disadvantages of the Decision Tree